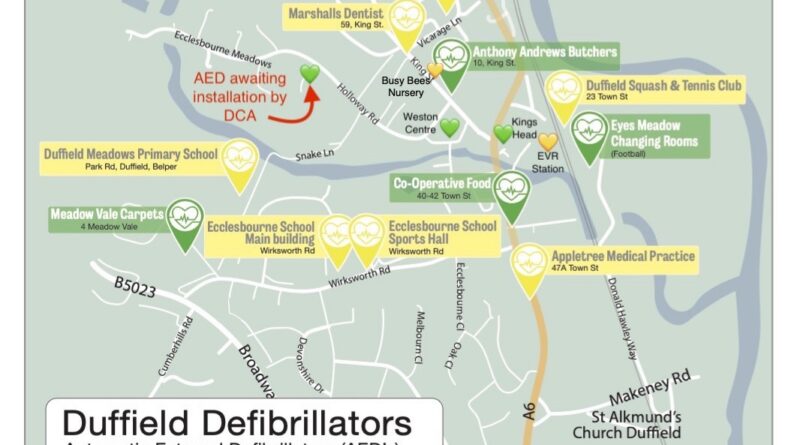 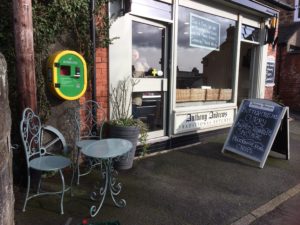 October 16th each year is World RESTART A HEART DAY!

To mark this day and as part of a project involving other village Organisations, and supported by the British Heart Foundation, the Duffield Community Association announced its commitment to purchase a further Defibrillator for Duffield which will be fully accessible to the public. 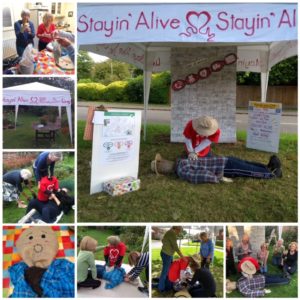 This follows on from the award winning entry to the Scarecrow Trail made by the residents of Cumberhills Road (Song: STAYIN’ ALIVE by the Bee Gees). Not only were the scarecrows well made, but also there was a serious theme…… What to do in the event of a heart attack; and the fact that we were aware of only 2 Defibrillators which are fully accessible to the public in Duffield. (by the Co-op; and at the Changing Rooms on Eyes Meadow)

To further raise awareness of this issue, the British Heart Foundation are prepared to hold training sessions on CPR in the village on how to use a Defibrillator in the event of an emergency; and further accessible Defibrillators are planned to be installed by village organisations.

Look out for further updates!

Why do we need more defibrillators?

The chain of survival, emphasising the importance of recognising cardiac arrest, calling for help, starting CPR and using a defibrillator without delay.

The Chain of Survival is used to emphasise the sequence of urgent actions needed when someone collapses with a suspected cardiac arrest.

The first three steps can all be done immediately by members of the public:

2. Start CPR and continue this until the ambulance arrives

3. Send someone to fetch an AED, attach its pads to the collapsed person, and follow its instructions.